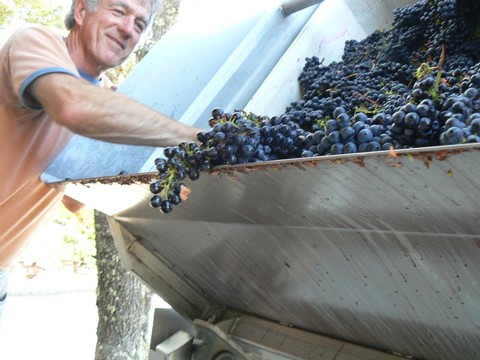 Chris Loxton is the 4th generation to be a grape grower, but the first to be a winemaker. The family vineyard is located in the Riverland of South Australia and the property was first planted in the 1890's. The early years were associated with grapes for the dried fruit industry, but the emphasis changed and over the years the grape varieties became Grenache, Mataro, Carignane, Shiraz, Cabernet Sauvignon and Chardonnay. In early 2016, Bob Loxton, Chris's father completed what might be nearing his 70th harvest, growing almost 200 tons of Cabernet, Shiraz and Chardonnay.

Although deciding to be a winemaker sometime during high school, and making some home-made wines prior to graduate school, a PhD in physics interrupted this dream. A year that was going to be post-doctoral work at Penn State soon became almost 2 years at Arizona State, then 8 years as a research Scientist of University of Illinois Materials Research Lab in Champaign Urbana.

A year at UC Davis to study enology was followed by harvest intern positions at Quivira in Dry Creek, St. Hallett in Australia and Sonoma Cutrer in Russian River before deciding in 1995 to remain in California. A full time winemaking position at Wellington Vineyards in '95 led to the first Loxton Cellars wine to be made in '96 as an after-hours project. This side project became the main focus in 2000 after leaving Wellington and winemaking moved over to the current location in 2004. The emphasis has remained on handmade wines, made without compromise, from some of Sonoma's best vineyards.